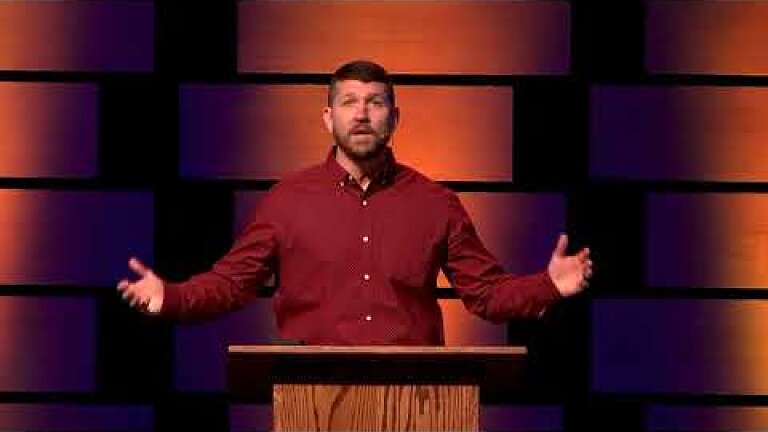 The subject we are diving into today, and over the next several weeks, is deep, rich, and can potentially change your life. I want to challenge you in this series to pray a particular prayer for your life: "Lord, help me to be closer to you than I ever have been." Not only do I want you to pray this prayer, but I want you to commit yourself to praying that your heart would genuinely desire to be closer to God. Because I believe if our hearts desire it, then we'll take actions to draw near to Him, and if we draw near to Him, He will draw near to us. He promises that in His Word. So it is a promise we can cling to.

If we pursue Him and draw near to Him, He will not leave us hanging. We will find Him when we seek Him with all of our heart.

C.S. Lewis "I believe in Christianity as I believe that the sun has risen: not only because I see it, but because by it I see everything else."

In this quote, Lewis is talking about the Christian faith, and how it is a lenses for seeing everything in life. In the same way, drilled down a little deeper, what I aim to show in this series is that I believe in communion with Christ, fellowship with Him, not only because I see it in Scripture, but through it, I see everything else in Scripture. Not only do I want you to see the importance of it, I want you to experience it. I want you to recognize that if you have put your faith in Christ, you are reconciled and saved to a relationship with God.

When my oldest daughter, Kaleigh, was 4 years old, we went Easter egg hunting at my grandmother's house. We had eggs scattered all over the yard, and we even had special eggs hid in different places. My grandmother also had some Easter decorations in the yard. She had a big wooden Easter Bunny, and a few oversized Easter eggs (that were like basketballs). After watching for a few minutes I noticed that Kaleigh had put one of those decorative eggs in her basket, filling the entire thing. She saw the decorative egg in the yard, not realizing it was just for looks, and thought, “I want the big one!” I love that she saw that one and said, "That's the one I want." I love that she didn't settle for just scooping up the small ones. You see, cause here's the deal, we were created and redeemed to experience relationship with God--that's the Big Egg--and yet many keep settling for less. And I want to show what we often settle for.

Scripture: Matthew 7:21-23 (ESV)
Often when we read this passage, we see it as the warning about end times judgment. It is certainly that. But the content of what Jesus says is also very instructive for other parts of our theology and understanding of the faith.

“Lord, Lord” — Jesus knows that many will call him by his proper title, demonstrating proper beliefs in him. To call him Lord implies a certain amount of knowledge and intellectual agreement. But Jesus says not all who call him that will enter the kingdom. This immediately tells us that there is more than being in the kingdom than right knowledge. Demons have right beliefs [give examples: trinity, salvation through Jesus, resurrection of Christ, 2nd coming and judgment].

James 2:19 -- You believe that God is one; you do well. Even the demons believe—and shudder!

“Did we not...” — Jesus then begins to go down the list of things people may claim they did for him. Good things. Religious things. But again, these actions are not enough for entrance into the kingdom. You see, we can still fall victim to this today. Didn’t we attend church, do social justice, pay our taxes, fight against political correctness in your name? But it is not enough. Beliefs and behaviors alone will not bring you into the kingdom.

Titus 3:4-7— But when the goodness and loving kindness of God our Savior appeared, he saved us, not because of works done by us in righteousness, but according to his own mercy, by the washing of regeneration and renewal of the Holy Spirit, whom he poured out on us richly through Jesus Christ our Savior, so that being justified by his grace we might become heirs according to the hope of eternal life.

When Jesus gives us a snapshot of the Day of Judgment, the Last Day, the Day of Sorting the sheep and the goats, the wheat and the weeds. It will not be a division of good people and bad people. It will not be the people who had the deep intellectual grasp of the gospel. What does Jesus say to these people? Depart from me, I never knew you. He doesn't know them. And he's not talking about being ignorant of their existence. He's saying there is no relationship. It will be those who know him and are known by him who enter the Kingdom. Relationship with God is the heart of salvation.

I was in my twenties before I ever heard the idea that we could have relationship with God. And I know many others with the same experience. I believe there are professing Christians all over the world who have settled for a Christianity that has no power. It is a Christianity rooted in right beliefs or right behaviors, but absent of relationship. There are many in the world, outside the faith, who've peeked in at Christianity, seeking to understand what it is about or teaches, and rather than hearing about a God who demonstrates amazing grace to sinners, through His Son, so we can have a relationship with God, they see Christianity as simply a series of intellectual propositions to be believed or a set of behaviors to be adopted. They reject a Christianity that is not even the heart of Christianity. Just BELIEVE and BEHAVE. BELIEVE & BEHAVE.

We’ve settled. There are some of you guys here who have settled. You have settled for simply believing right beliefs or living the right behaviors, but you don’t experience regularly the ongoing reality of relationship with God, communion with Him. You're not pursuing to know God in relationship.

(ILLUSTRATION: getting married but then neglecting relationship)

You see, marriage is a great illustration, because marriage is a pointer to the relationship of Christ and His bride, the Church. We enter into a union with the Living God through faith in Christ. This is like the marriage ceremony, it becomes legal. But once we enter marriage, we are invited to a relationship, an intimacy. This is communion.

READ: Philippians 3:7-11 (ESV)
Paul lists out all the reasons, if he wanted, that he could boast in the flesh. He could boast of his education, status, piety, practices. He could point to how solid his beliefs and how holy his behaviors. If anyone wanted to have a competition of the best beliefs and behaviors, Paul could beat them. But whatever gain he had in those things, whatever benefits they gave him, he counts as loss for the sake of Christ. In fact, he counts EVERYTHING as loss because of theSURPASSING WORTH of knowing Christ Jesus my Lord. What does Paul value above everything? Knowing Jesus Christ. THAT is the all-surpassing worth. There's nothing more satisfying to our hearts.

He suffers the loss of all things and counts them as RUBBISH, to have Christ and be found in him, not with a righteousness of his own, but that which comes through faith in Christ. This is the gospel. This is how we are saved. Then he says again, “that I may know him...”

The storyline of the Bible is all about knowing Him. It’s all about Communion with the Lord. 1. Man was created in the beginning to know and walk with God. They weren’t created to simply believe in Him, but to fellowship with God and love Him. 2. But man rebelled against God, and had their communion with God severed. They were expelled from the Garden. That relationship has been effected every since that day. 3. But God did not abandon us. He establishes a covenant to set apart a people for Himself, they would be His people and He would be their God. This people starts with Abraham and becomes the nation of Israel. But it is quickly clear that the blessing to Abraham would be a blessing extended to the whole world, and from Israel would come a Messiah and Redeemer to reconcile a people from every nation, tribe, and tongue to communion with the Lord. 4. And what is Heaven going to be like? Simply believing in God? No, we will know Him and walk with Him forever. Created for Communion. Severed from Communion. Christ restores Communion. And eternal life is Communion with God forever.

1 Peter 3:18 -- For Christ also suffered once for sins, the righteous for the unrighteous, that he might bring us to God, being put to death in the flesh but made alive in the spirit,

Today, I want you to know both. Don’t settle. Quit stuffing your life full of the little easter eggs that never satisfy. Pursue the big egg. Go after Him with your whole heart. If you have tasted and seen that the Lord is good, then give Him thanks for His grace and ask Him to stir your heart to go deeper. If you are not enjoying daily communion with God, pray for the Holy Spirit to stir your heart and breed a spiritual hunger in your soul for more of Him. If you have never placed your faith in Christ and repented of sin, cry out today and cast your cares upon him.