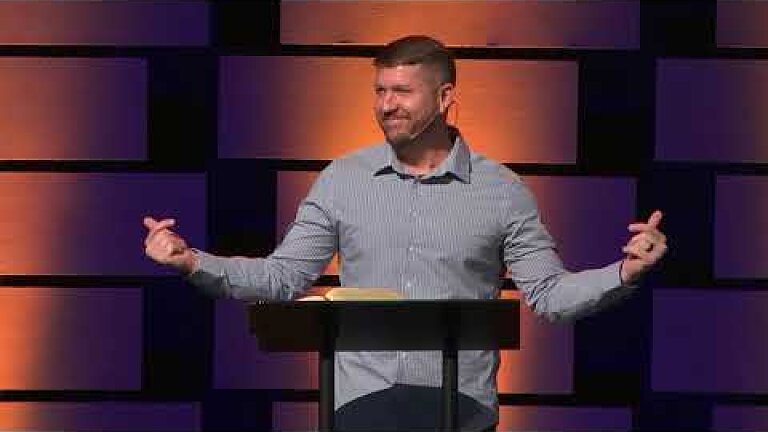 Intro:Our church used to do some work in Haiti with an organization and particular church in the northern part of the country. The first time we made the 6 hour drive on the road to Port de Paix was brutal. It is constant bumps, holes, driving through river beds, hugging cliffs, and it seems to never end. When I describe a terrible ride, I don't do justice to how bad this ride is. But the second time wasn't as bad (nor any of the next times). Why? Because you expect it. The first one is awful because you don't expect what is going to happen. But once you're in the right frame of mind, you just embrace it. You embrace it as part of the experience.

Why is the ride worse on the first trip? Because you don't know what to expect. Many professing Christians who run into trouble because of their beliefs experience a rude awakening when they are made fun of, ostracized, called names, and lose relationships. Many believers think that following Jesus is supposed to lead to smooth sailing and easy living. Many have been told that being a Christian and being faithful is supposed to make things turn out great for us. But that isn't true. So when the hatred of the world comes for what we believe, many don't know what to do. Some buckle and change what they believe. Some cower. Some think God rejected them or forgot them. But the Bible tells us over and over again to expect suffering and persecution.

2 Timothy 3:10-13 -- 10 You, however, have followed my teaching, my conduct, my aim in life, my faith, my patience, my love, my steadfastness, 11 my persecutions and sufferings that happened to me at Antioch, at Iconium, and at Lystra—which persecutions I endured; yet from them all the Lord rescued me.12 Indeed, all who desire to live a godly life in Christ Jesus will be persecuted, 13 while evil people and impostors will go on from bad to worse, deceiving and being deceived.

1 Peter 4:12 -- Beloved, do not be surprised at the fiery trial when it comes upon you to test you, as though something strange were happening to you.

Matthew 5:11-12 -- 11 “Blessed are you when others revile you and persecute you and utter all kinds of evil against you falsely on my account. 12 Rejoice and be glad, for your reward is great in heaven, for so they persecuted the prophets who were before you.

This passage might explain why Peter and John left rejoicing after being released by the religious leaders and being beaten by them. They couldn't believe Jesus counted them worthy to suffer for his name (Acts 5:41). They expected it. They embraced it.

Christians should expect hatred from the world. Expecting it prepares us for when it comes so that we can stand strong. This is why Jesus taught his disciples what we see in our passage today.

The context of this passage is that Jesus is telling his disciples that persecution is coming to them soon. He is hours from his own persecution through the cross, but he knows what awaits them to. Jesus is talking to his apostles in this (11 of them) passage, and it certainly directly applies to them. But it also a teaching that is generally true for all disciples. So it is also true for us.

vs 18 -- "If the world hates you"...it will hate you. They will be hated. Why? Because they abide in Christ and are His chosen ones out of the world. They are going to go and bear fruit. [c.f. previous verses] But who is going to do the hating? The world = those powers, peoples, those ideologies that are raised up against God. The world will hate you because you belong to Christ.

He's saying this to remind them that if they are hated, they should remember that it hated him first. They've seen it. They've watched as religious leaders have questioned him and crowds have tried to stone him. But they are about to witness it first-hand to a whole new level. His arrest is hours away. His death for sinners is coming the next day. So as they experience hatred from the world, they can remember they are in good company, because they hated him too.

Friends, has Christ chose you out of the world? What a privilege! What a calling!

vs 20 -- He tells them to remember the word he spoke to them. What word? "A servant is not greater than his master." Why does he want them to remember that? Because if the master is persecuted, why do they think they would be exempt? If Jesus was persecuted (and he was), then they can expect it too. Why? Because they are his. They are his disciples.

If they kept Jesus' words, they'll keep their words. This is why true believers resonate with and find the truth when churches preach it. They will find living water and green pastures.

vs 21 -- What things will they do? They will arrest them. Run them out of the synagogue. They'll kill them. And they'll do it because of their relation/connection to Jesus. Why? Because they don't actually know the Father at all. They don't know God, even though they may think they do, so they hate Jesus and hate his disciples.

vs 22 -- Jesus says if he "had not come and spoken to them," he's referring to his incarnation and teaching from the Father. They wouldn't be guilty of sin. Is he saying they wouldn't have original sin or ever commit daily sin? No. This is why studying theology is important for proper interpretation of the Bible. He's not saying they wouldn't be sinless as creatures. He's saying if he wouldn't have come and clearly revealed himself to them they would have continued in thinking they were right with God and serving Him alone. But now that they reject the One He sent, it is clear that they are sinners and have no excuse for it. They've been exposed. Jesus' coming doesn't make them guilty...it reveals their guilt. Before they could be ignorant about it. Now they have no excuse. They never they were rejecting God. They thought they were serving Him. Now it is clear.

vs 23 -- Jesus leaves no room for questions or doubts. Whoever hates him hates the Father. Whoever hates Jesus hates God. The one who rejects Jesus rejects God. This is another clear statement of the Oneness of Christ and the Father. The Father and Son are one.

vs 24 -- He repeats a similar line of argument he did in vs 22. In vs 22 he refers to his coming and teaching. Now he refers to his works displayed, his miracles. Again, because they've seen them, they are guilty. They have no excuse. It reveals they hate not only Jesus, but the Father.

This is a good reminder that it is not God doing tricks and miracles that would bring people to faith. "If God would just show out a little more, then people would believe." Really? All of creation testifies to His glory. God sent His Son in the form of flesh and died for sinners and rose from the dead. What else can God do to bear witness about Himself to the world?

vs 25 -- The word is written in their law...in the testimonies God gave them...that they would hate the Christ without a cause." In other words, God bore witness before Jesus' coming that their wicked hearts would reject the Christ for no reason at all.

Psalm 69:4 -- More in number than the hairs of my head are those who hate me without cause; mighty are those who would destroy me, those who attack me with lies. What I did not steal must I now restore?

Psalm 35:19 -- Let not those rejoice over me who are wrongfully my foes, and let not those wink the eye who hate me without cause.

Again, Jesus' whole point is that if they hate him this way, then his followers should expect it too. They will be hated.

Close: There have been those who are opposed to God in every generation. No exceptions. They will hate those who walk in the truth and know the truth. No amount of niceness or cleverness will endear them to us. No amount of softening the truth, apart from simply discarding it, will make them respect you. We should expect there will always be those who hate us.

What do we do in light of it? Live faithful to what God says anyway. We should follow our convictions anyway.

How many of you have heard of John Wycliffe? He was a leading theologian and scholar at Oxford in England during the 1300s. He also pastored a church. What made Wycliffe standout was he was convinced the Scriptures, not the pope or church, was the final authority. These views got him in trouble. But he taught these things to his church and wrote books about this that circulated and gained traction. He spoke against indulgences as unbiblical. This brought hatred. He spoke against confessionals. This brought hatred. He spoke against transubstantiation. This brought hatred. He preached that it was faith in Christ alone that justifies sinners. This also brought hatred. But the biggest contribution Wycliffe made is what many of you find in your laps right now. You see, at this point in the 1300s, there were only Latin copies of the Scriptures. Nobody in the world had the Bible in a native language of their own. Wycliffe began working on a translation in English. The church bitterly opposed it and said:

"By this translation, the Scriptures have become vulgar, and they are more available to lay, and even to women who can read, than they were to learned scholars, who have a high intelligence. So the pearl of the gospel is scattered and trodden underfoot by swine."

"Englishmen learn Christ's law best in English. Moses heard God's law in his own tongue; so did Christ's apostles."

This work lasted the rest of his life and was finished by a friend and colleague. The result was that an entire Bible was translated into English, by hand, and copied for circulation (this was before the invention of the printing press). Wycliffe's work in translating the Bible and writing about the authority of Scripture as preeminent were the seeds of the Protestant Reformation that would follow in just over a hundred years later. In fact, it was Wycliffe who John Huss and Martin Luther read and were inspired by.

All of this came at a cost to John Wycliffe, but he didn't waver. In fact, he believed Jesus' words when he said, "Rejoice and be glad, for your reward is great in heaven, for so they persecuted the prophets who were before you." Wycliffe was hated during his life, and even after his life, for his undying commitment to the truth. Yet it was his commitment to the truth, and the suffering under that hatred, that sparked the Reformation. He is nicknamed "The Morning Star of the Reformation" because he was the light shining on the horizon that signaled the coming of daylight.How might your faithfulness under persecution, hatred, and opposition be used of God to inspire others?

How might your faithfulness be a spark that helps someone else stand firm too? Paul writes to Timothy in 1 Timothy 2:15 that the church is a "pillar and buttress" of the truth. We are the support and hold up the truth of God in the world. The truth will always be under assault, but our God-given role as the church is to stand firm in support of the truth, even if that costs us and makes us the object of hatred from the world. May He give us grace and strength to stand.