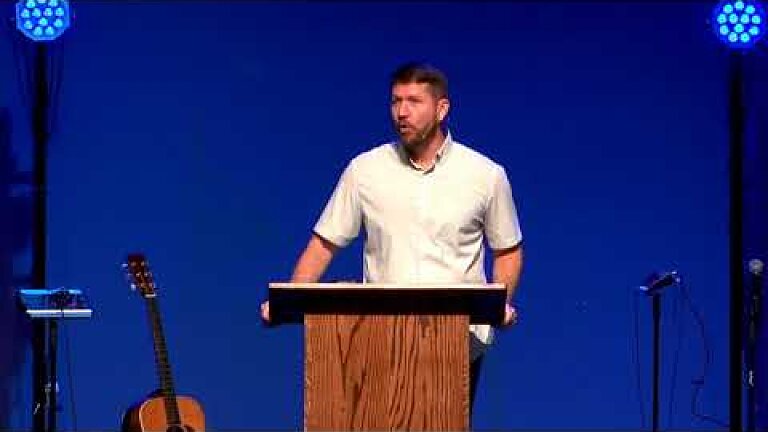 John Huss was born in 1369 in what is the Czech Republic today. Huss trained for the priesthood (at this time there was only the Catholic Church). After his training, he eventually was ordained and became a preacher in Prague at a church which held 3,000 people. But in that role, and through his studies of the Scripture, Huss had an awakening to the true gospel. He also read the writings of John Wycliffe who was roughly 40 years his senior. As his knowledge of what the Scriptures taught grew, he also grew more concerned and convicted about doctrines and traditions being taught by the Official Church. He began preaching the truths that he saw in the Bible, and this caused quiet a stir. He was eventually forbidden to preach and excommunicated from church, but it was sort of a "on paper only" situation and he continued preaching.

When the selling of indulgences began (a practice of letting people buy time out of purgatory for themselves or loved ones), Huss spoke openly against the Pope and the corruption of the Church. His "on paper only" situation became actual, and so Huss eventually withdrew to the countryside so his church could continue receiving communion each Sunday, and started writing fervently about the ills in the Church. In November of 1414, a council convened and the Holy Roman Emperor urged Huss to come defend his doctrine, promising him safety. But when he arrived, they arrested him, put him in chains, and called for him (in front of the authorities) to recant his views. Huss said to them, "I appeal to Jesus Christ, the only judge who is almighty and completely just. In his hands I plead my cause, not on the basis of false witnesses and erring councils, but on truth and justice."

For 7 months he remained imprisoned, but on July 6th 1415, he was dressed in his priestly garments, taken to the cathedral, and then stripped piece by piece of his priestly garments (an act of humiliation). They gave him one last chance to recant as they put him on a stake. He refused. He prayed aloud as they prepared to burn him, "Lord Jesus, it is for thee that I patiently endure this cruel death. I pray thee to have mercy on my enemies." With that, they lit him on fire, and those present testified they heard him reciting the Psalms as the flames engulfed him. It was John Huss, and his writings, that a hundred years later, a German monk named Martin Luther would discover. And the Reformation would begin.

The reason I open today with this story of John Huss is:

1. it is important we learn from Christians who have gone before us in church history (this is why we do the Cloud every year at TJC -- start again in October), and

2. this particular story highlights the boldness of this believer, to stay committed to the truth of God's Word, in the face of danger.

As we continue in our series Go & Tell, we've developed a biblical theology of understanding missions and evangelism, and we've even discussed tactics and strategies, but today we are focusing on the necessity for us as Christians to be bold. Boldness is a quality that should mark our lives, especially as it pertains to how we live out our Christian commitments. When we talk about boldness, we don't mean brashness or rudeness or overbearing. 1 Peter 3:15 talks about always being ready to make a defense for the reason for the hope in you, but with gentleness and respect. [Biblical boldness are actions empowered by the Holy Spirit, fueled by conviction, courage, and urgency, in the face of threat or opposition.] Those three parts of the definition are important: conviction, courage, and urgency.

Conviction -- without conviction, there's nothing to be bold about. Convictions are the substance that produce what we are bold about. A Barna study found that 47% of Millennials think it's wrong to share your faith, and Gen Z is an even higher proportion.

Courage -- without courage, we won't live our convictions in the face of resistance or opposition that comes. Courage is acting in spite of our fears, not the absent of fears. This past week, John Gibson, CEO of Tripwire tweeted his support of the TX abortion law and was subsequently fired. In our culture and the direction we're heading, it will require boldness in the face of all kinds of threats to you.

Urgency -- without urgency, we're never be compelled to get into the action or the arena. Urgency is driven by the fact that everyone we encounter will spend eternity somewhere. Sinners who die in their sins, and do not call upon Jesus for forgiveness, will perish eternally in Hell. That's reality. That's why there is urgency. Two on our staff recently shared with a dying man and saw him come to faith before he passed.

So boldness mark our actions of sharing the gospel and telling others about Christ. They are empowered by the Holy Spirit, fueled by conviction, courage, and urgency, in the face of threat or opposition. The threat or opposition we face today is personal rejection, cultural rejection, status and approval, people-pleasing, comfort, imprisonment, or even our lives.

We are not going to squeeze every ounce of application from these 31 verses that are there, but we are going to highlight this passage and its particular focus on the boldness of the believers.

Coming off the healing of the beggar at the Temple gate, the crowds are gathered around Peter and John. They've offered forgiveness through faith in Christ to even those who were a part of the crowds yelling to crucify to Pilate at the clown-show trial of Jesus.

vs 1-4 -- The religious leaders have John and Peter arrested for teaching the people and claiming Jesus' resurrection from the dead. But many are coming to faith through hearing their words.

vs 5-12 -- All the religious leaders gather the next day and bring John and Peter in and question them. Peter, filled with the Holy Spirit, begins to lay it down. He shares the gospel with them. He speaks about the death and resurrection of Jesus. And he declares that there is salvation in no other name but the name of Jesus.

vs 13 -- The religious leaders were astonished because they knew Peter and John were uneducated men (not formally trained), yet they spoke with boldness. They recognize that they had been with Jesus. They had communion with God, walking with Christ through the word and prayer. (Psalm 119:99, "I have more understanding than all my teachers, for your testimonies are my meditation.")

vs 23-31 -- Peter and John leave the gathering and go report to their friends and other believers all that happened. Then they prayed together and thanked God. And in their prayer (particularly vs 29), they ask for help to continue speaking with boldness. After they pray, the Spirit fills the room and it says they continued to go out and speak the word of God with boldness.

This story and these verses in particular, contain the idea of the boldness of Jesus' disciples. And it will from this point on in the book of Acts, boldness marks the church. Boldness marks the individuals who bear witness about Jesus. Acts 4 leads the theme of boldness for the remainder of Acts.

Jesus Christ with all boldness and without hindrance.

Over and over, throughout the entire book of Acts as we watch the gospel spreading throughout the world, it is boldness that marks the early church and its members. Conviction that Jesus is Lord marked the believers. Courage to share that conviction in a world that won't universally love you. Urgency to share because people without Christ are living on borrowed time and are living on the bring of eternal wrath.

2. Boldness is contagious. In Philippians 1, Paul talks about his trials and struggles for preaching the gospel. He was in prison even as he wrote his letter to the church of Philippi. But notice what he says in vs 14:

Philippians 1:14 -- And most of the brothers, having become confident in the Lord by my imprisonment, are much more bold to speak the word without fear.

Paul's boldness in the faith to preach and teach, despite being arrested (even continuing in boldness from prison) gave boldness to the rest of the church. Why? Boldness is contagious. John Huss' boldness gave Luther the courage he needed to be bold in spearheading the Reformation.

3. Boldness requires dying to self. Fear of rejection, losing status or esteem, having people discount us or discard us, is something we have to die to. We spoke about this a few weeks ago, but until we lay down our lives, and recognize that our lives are not our own, we will not live bold.