Note: For Kaleb Reed's story, read "Peace in the Sovereignty of God."

I’m not a very emotional person. During one season of my life I even wondered if I was somehow broken. I hadn’t cried in years, even at things I thought warranted tears. It’s not that my heart didn’t care, but I think a combination of factors—our son’s incredibly difficult medical trials being at the top of the list—had dried me out from being able to weep. That has changed some over the last few years. I know that I’m still not as tender-hearted as Christ is, nor where I think he wants me to be. However, every once in a while, something jars my soul and those underused tear ducts get a workout.

One such occasion happened when watching a show called The Man In The High Castle. It is an Amazon Prime show that portrays an alternate history where Nazi Germany and Imperial Japan win World War II. In this alternative world, America is divided in half. Everything West of the Rockies is Japanese territory, and everything to the East is Nazi Germany territory. One of the main characters is a former American solider (John Smith) who becomes a leader in the new Nazi regime in America. He has a son, Thomas, who has a medical condition that will worsen with time and be impossible to hide. The problem this poses is substantial because the Nazis eliminated all those with birth defects and deformities because they wanted a pure race. The son, in order to make his dad proud and be a good Nazi citizen, turns himself in. He’s taken away by authorities to the heart-wrenching appeals of his parents. Thomas was gone.

Later in the series (spoiler alert), it is revealed that the Nazis have discovered a portal to alternative worlds. These alternative worlds have the same people on them as in this world, but things are different in them. In some worlds, the Nazis didn’t win the war. America is free. And as John Smith—our American turned Nazi officer—discovers, there are worlds where Thomas is still alive.

Smith goes to one of those worlds. He’s not thinking anything about seeing Thomas. As he wakes up in a house and his wife is serving him breakfast, Thomas walks into the house. Thomas is just going about his day. His father is dumbstruck at the sight of his son. As Thomas is digging through the refrigerator his dad gets up from the table, goes over to his son, and embraces him with such force that it catches Thomas off-guard. Smith just holds the embrace. He looks at his son’s face, and soaks in the presence of the boy he hasn’t seen in years.

The first time I watched the scene, it blindsided me. I wept. Without any warning, my heart melted into a puddle as I thought about the day when I will once again embrace my own son, Kaleb. He’s been gone more than two years now, but watching the scene where John Smith sees his son, Thomas, immediately made me imagine holding Kaleb. The scene of this show, regardless of whether the writers of the show recognized it, are foreshadows of the resurrection reunions that God has staged for all His children.

This scene from The Man In The High Castle is reminiscent of the story of Jacob and Joseph in Genesis 46. Jacob has believed Joseph is dead for years. He hasn’t seen his son in forever. The last thing he heard was that his son was mauled by a wild animal. It was a deception by Joseph’s brothers, but Jacob is heartbroken. Years later, after Joseph reveals his true identity to his brothers, he has them retrieve his father. Jacob can’t believe it. He goes to meet his long-lost son. Genesis 46:29 says, “Then Joseph prepared his chariot and went up to meet Israel his father in Goshen. He presented himself to him fell on his neck and wept on his neck a good while.” This embrace is a foreshadow of resurrection reunions to come. Jacob holds his son in his arms. His son that was dead, is now alive.

Friends, these examples in both Genesis and The Man In The High Castle are foretastes of a coming day. These stories and images stir our hearts at a deep level. Yet, they are only foretastes. Both Jacob and Joseph eventually die. John Smith has to leave the alternate world, and Thomas, behind. Nevertheless, there is a Day coming when Jesus returns where these reunions will be real and forever. In 1 Thessalonians 4:16 we read, “For the Lord himself will descend from heaven with a cry of command, with the voice of an archangel, and with the sound of the trumpet of God. And the dead in Christ will rise first.” Jesus’ descent from Heaven to earth will mark the end of this age and usher forth Christ’s eternal kingdom on earth. The dead will be raised! We will receive glorified bodies, and Jesus will make all things new!

Husbands and wives, parents and children, friends and family will raise to glorify Christ and reunite with one another. There will be embraces that are held and enjoyed without thought of moving on to the next thing. I cannot wait to look into the brown eyes of my son and tell him how proud I was to be his father. I long to put my hands on his face and let my thumbs rub over his cheek bones and my fingertips run over the back of his neck. Imagining that embrace stirs my heart and moves me to tears even now. Every foretaste I get on this side of Jesus’ return is a little gift reminding me of what is ahead. Thank you, Jesus, for the hope that is found alone in you. 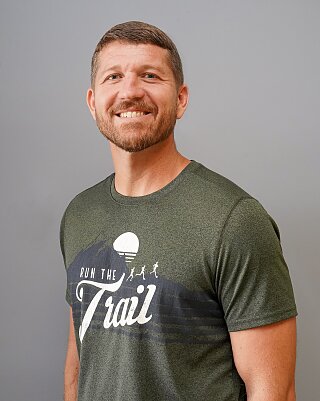