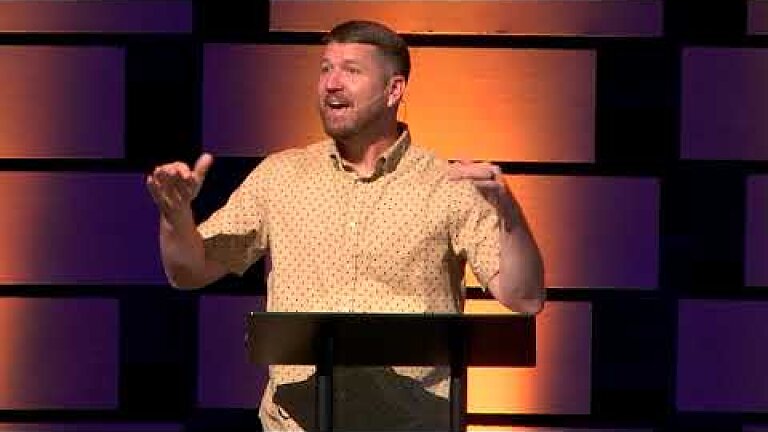 "Faith alone in Christ alone" is how anyone is saved.
Jesus + Nothing = Everything. That is the proper gospel math equation for our salvation. And it is easy for us to make that declaration and to believe that declaration, but it is a difficult thing to hold on to. Why? Because our hearts are always prone to replacing that word "nothing" with any number of things. The hardest thing is not believing faith alone in Christ alone, the hardest thing is continuing in it. It is easy to confess it doctrinally, but replace it practically.

I've watched people wander off into all kinds of practices because Jesus + Nothing doesn't feel spiritual enough. They are looking for something more advanced. More mystical. More intellectual. Or more sacrificial. The result is they leave the gospel. They leave "faith alone in Christ alone" and beginning adding.

We must guard our hearts from the allure and temptation to move away from the simplicity of the gospel.

vs 16 -- Therefore let no one pass judgment on you in questions of food and drink, or with regard to a festival or a new moon or a Sabbath.
Notice that word, "therefore." Paul is going to lay forth a principle in light of what he just said. What did he just say? He said that our sin debt and the legal demands associated with it were laid aside and paid for at the cross. And by paying for our sins, he put the principalities and authorities to open shame. The victory has been won. The debt has been paid. Our salvation is assured.

Therefore...let no one pass judgment on you in questions of food or drink or with regard to festivals or new moon or Sabbath. This is a huge statement. Because you are justified and redeemed through Christ's finished work, don't let others tell you there is still something yet undone. Remember, Paul is addressing mainly Gentile Christians. Some Jewish folks were judging them for not following the Mosaic law, particularly the dietary laws, festivals, and Sabbath. But Paul says they are in Christ, and shouldn't let anyone judge them.

vs 17 -- These are a shadow of the things to come, but the substance belongs to Christ.

We talked about the Sabbath earlier in the year, and emphasized this very point. One of the prevailing themes of the Old Testament is that many of the festivals, ordinances, and special days were shadows and symbols of the coming Christ.

For this reason, what does he say?

vs 18-19 -- Let no one disqualify you, insisting on asceticism and worship of angels, going on in detail about visions, puffed up without reason by his sensuous mind, and not holding fast to the Head, from whom the whole body, nourished and knit together through its joints and ligaments, grows with a growth that is from God.
Nobody can disqualify you if you are in Christ. There will always be people who pretend they've tapped into some better way, higher way than you, and try to get you to join them, but don't let anyone disqualify you and insist on all these things.

Notice Paul's assessment...they are puffed up without reason. They are not hold fast to the Head, which is Christ. And it is in Christ that the whole body, the church, is nourished and knit together. If you are in Christ, you have enough. Jesus + NOTHING.

vs 20-22 -- If with Christ you died to the elemental spirits of the world, why, as if you were still alive in the world, do you submit to regulations— “Do not handle, Do not taste, Do not touch” (referring to things that all perish as they are used)—according to human precepts and teachings?

If you were crucified with Christ, and your sins are there with him, making you right with God, why would you then turn to some other way. Why would you submit to regulations and all these commands that were always pointing to our need for Christ? He's asking a question, but it's rhetorical. You shouldn't submit to these things. Don't do it!

vs 23 -- These have indeed an appearance of wisdom in promoting self-made religion and asceticism and severity to the body, but they are of no value in stopping the indulgence of the flesh.
Here's what Paul says...all these attempts as Jesus + ANYTHING has an appearance of wisdom. It looks super spiritual. It looks really holy. But it has no power. It cannot stop an individual from indulging in the flesh. At the end of the day, Jesus is still the only one who can help us. Jesus is enough for us.

1. Beware of extremes that go beyond the gospel.

The reason I use the word "extremes" is because there are elements in the things I'm about to talk about that should mark the life of a Christian, but the extreme version of it takes you into a ditch and away from the gospel.

a. legalism -- Those who fall into this ditch go beyond the Bible in setting up a holiness code, and often seek to impose Jewish law on Christians. Now, remember, a part of what it means to be a Christian is to obey God and be holy. So we want to be folks who follow God's Word. But legalism is a ditch that quickly leaves the gospel and begins imposing lots of extra demands. Jesus chastised the Pharisees for this constantly because they put massive loads on people's back that were rooted in tradition, not Scripture.

b. mysticism -- Those who fall into this trap believe that true Christianity must be accompanied by miraculous signs, visions from God, and prophecies from God. Again, true Christianity does include being led by the Spirit, and believes God can heal the sick, and we believe the Lord does prompt us to pray for certain things, or go speak with certain people. But the ditch of mysticism believes takes you into unbiblical extremes.

I've watched more than a handful of people in my time as pastor here get caught up in the most common form of mysticism today, which is charismania. I'm not against though who are charismatic (believe in the gifts of the Spirit, etc.), but I'm against charismania. These folks believe if you don't speak in tongues you're not a Christian. They will listen to a man stand up and say, "God told me..." and never test it against the Bible. They think every infirmity, sickness, and disease should be healed if you have enough faith. This is dangerous stuff. They often try to demonstrate this stuff with gimmicks like healing people's legs that have one shorter than the other.

c. asceticism -- Those who fall into this trap believe that extreme displays of denying themselves or enduring pain make them more holy. The idea is to forego anything that looks like worldly pleasure. This may look like extreme fasting. Or it could look like depriving oneself of sleep or sleeping on the floor instead of bed. Some even go as far as hurting themselves physically. The goal is to inflict punishment on the body.

2. Understand your heart's attraction to additions to the gospel.

There is a part of us that loves to feel like we have some advanced version of something that the rest of the plebes don't have. The peasants don't have this special access.

Illustration: a get a little proud when I walk past all the people in the TSA line and I go to the TSA-precheck line. I strut past them with so much high-brow silliness.

I'm being a little playful here, but the reality is our hearts truly like that. We have a draw to things that not everybody has or knows. So when we hear about or see some form of Christianity that looks higher, more advanced, more exclusive, we are drawn to that sort of things. Just remember that it is our sinful natures that produce this in us.

3. Understand the difference between gospel additions and gospel growth.

We're talking about all these allures and temptations to go beyond the gospel. But understand that I'm not advocating for simplicity or inch-deep understanding of the faith. When I talk about not moving on from the gospel into other things, I'm not saying there isn't depths and riches of growth we can experience within the gospel. There is! Honestly, most of us haven't even scratched the surface of the depths, riches, and beauty contained in knowing the Lord and understanding His Word. Not even a fraction.

I love Paul's instructions to Timothy as he's teaching and discipling him.

2 Timothy 2:7 -- Think over what I say, for the Lord will give you understanding in everything.

He tells him to "think over what I say." Think about it. Reflect on it. There are realities and growth in the things of God we still have. Most of us aren't even close to near the wisdom and biblical insight we could have if we studied and thought on these things. But it's not just our mind, but our hands as well. We don't need additional gospels, for most of us we to learn how to obey what God has already revealed: give generously of our money, order our lives according to Scripture, serve the Lord, share the good news of forgiveness through Jesus with others, etc.

A few years ago I wrote an article that went viral called "Compounding The Pain." It was a response to the Bethel Church movement to pray that God would raise from the dead, the little daughter of the worship leader who had died unexpectantly. It had been days since she had died, and they refused to bury her, instead, they asked people around the world to pray for God to raise her. In the article, I acknowledge that God CAN raise the dead. But he never tells us to pray or expect such things. Death is a reality in this life until Jesus returns. I wrote the article a week after my own son had passed. Our response was very different. We shed our tears, mourn his loss, and grieved with hopeful expectation of the ultimate resurrection of the dead when Christ returns. Our mourning was a quiet, tear-filled, hope-filled response to death, because of Jesus. There response was a metaphorical illustration of the prophets of Baal who cut their wrists hoping it would move their god to act. It wasn't grounded in Scripture, it was mysticism. And it left many in their movement disillusioned. Many left concluding they didn't have enough faith. Others left confused altogether that God didn't answer, and they had no categories for why.

This is why these things matter. If you move on from Jesus and into to these silly add-ons to the gospel, they have no power. Not only do they have no power, they rob us from the source of true power: reliance upon and rest in Jesus. May we be people who refuse to turn to the left or right, veering off into ditches, and instead, stay the course in clinging to the place where our only hope is found: Jesus.